During Autumn 2014, members of the ACS were  busy researching and field walking  farmland surrounding Llanfrechfa Church, and  discovered some compelling evidence of a farmstead in the area.

After seeking permission from the owners of  Pant-yr-Eos Farm, we arranged a short, three day investigation on the site, primarily to look for the farmstead but with a  also with a view to research some other interesting  features in the area. Roman or Early Medieval connections were rumoured.

The Field Evaluation was carried out in November 2014

On this short dig, our aim was  to pin point one of these farmstead buildings foundations using a series of test pits.

Mapping evidence shows that, at one time, there may have been a farmstead with a barn on the site (as shown on the 1840’s tithe map) but at present there is nothing on the ground to show that there may have been something there, as shown in the photo below, however when the was probed with metal rods, we could feel lots of stone underneath the grass.

(below) Looking at the 1840’s Tithe map of the area, we see this, a building on the site

satellite image of the area, we can pinpoint where the farmstead was. 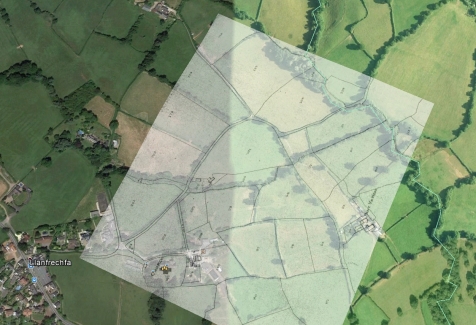 From the enlarged view above, we can see what looks like a farm, some smaller buildings and a larger one , possibly a barn.

On our first day on the site we  opened up two trenches, carefully chosen to be away from the main high pressure gas main that runs directly below which apparently feeds Llanwern Steel Works  and Uskmouth Power Station, plus a large proportion of the residential properties in South Wales. (We contacted Wales and West Utilites for health and safety information for our risk assessment )

The first small trench was been opened on what we thought may be a platform, but on closer inspection it turns out to be natural, with a small depression running down to what was probably a dew pond at the bottom of the field. 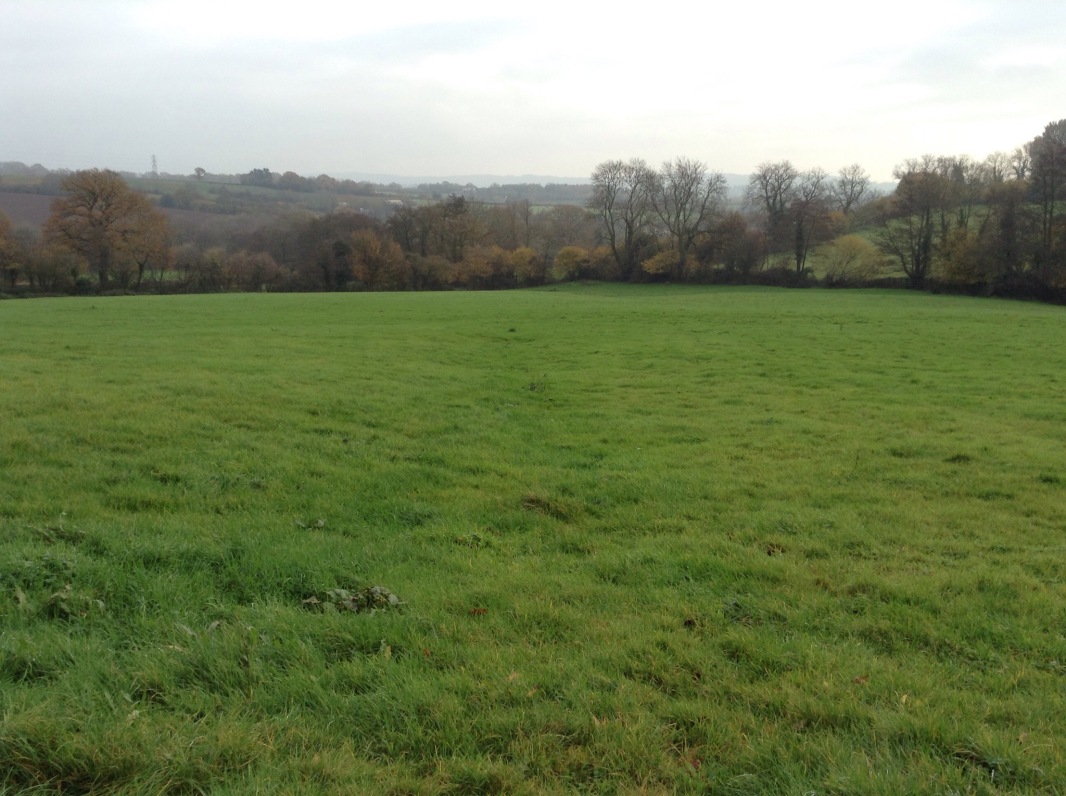 The small test trench on the “platform” showed no interesting features, just various coloured soil layers, so it was recorded and backfilled. 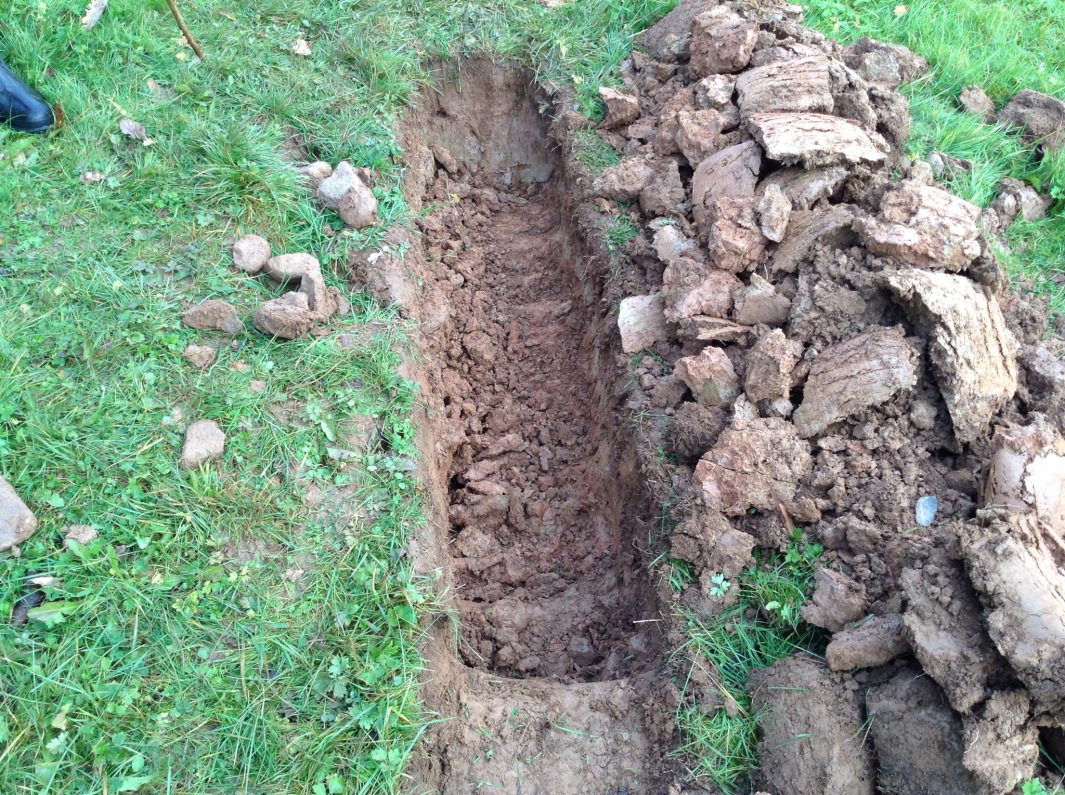 However the main trench at the possible farmstead site was  already turning up finds, clay pipes, horseshoes and ceramics.

Richard and Rodger were chatting  with the Farmer who owns the land recently, but even though the family has been on this land for 100 years or more, the Farmer had no recollection of any building being on this land in living memory, nor can he recall any mention of it by his predecessors. The Tithe map of 1840 shows the buildings , but if the map was copied from an earlier survey without an actual visit to the land, the buildings may not have been present at that time. He also said that they didn’t bother to plough the field because there were too many stones in it.

Below is a map of the buildings as shown on the 1840’s tithe map. To mark an area to dig, we took measurements from several fixed points around the site using the map as a reference to replicated the map layout on the field . We then marked out a 10 meter square area as our focus of investigation.

We started digging but initially  little was found, other than the items mentioned previously.

So we extended the trench and started to come down onto some sort of  surface, with what appeared to be plaster coming up, so we knew we were close but could we find the edge of the building? Unfortunately time was against us, and as we started to loose the daylight we packed up on day and left the site overnight with this tantalising mystery just beyond our grasp.

Friday started out fairly damp and dismal, but our excavation from the previous day had survived the night very well. We put up the Gazebo to protect the Archaeology from the elements. All good digs start out with a chat over  coffee  and biscuits, and today the warm drink was most welcome as the temperature dropped to a rather chilly 6 degrees C, but it felt a lot, lot  colder in the wet conditions.

The demolition rubble was cleaned and recorded so we were able to go down to the next layer.

We carefully trowelled away the demolition rubble until some larger stones began to appear. 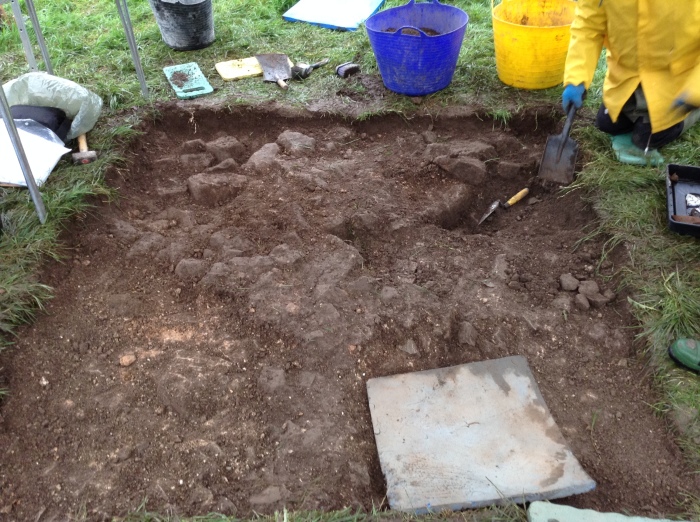 As we continued to work our way down,  the new context began to emerge. A line of stones in a straight line with what appeared to be mortar between the joints. It looked like we had found one edge of the Farmhouse. The wall was aligned in a NNW direction  with our trench being aligned to the east/west .

The stonework was cleaning up very nicely , with several finds being uncovered. 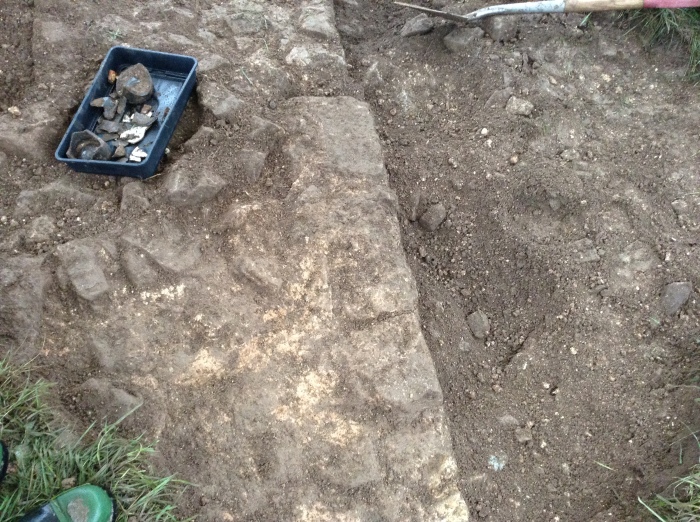 Then the bottom of the bottle appeared, the base being extremely domed , far more so than modern bottles. 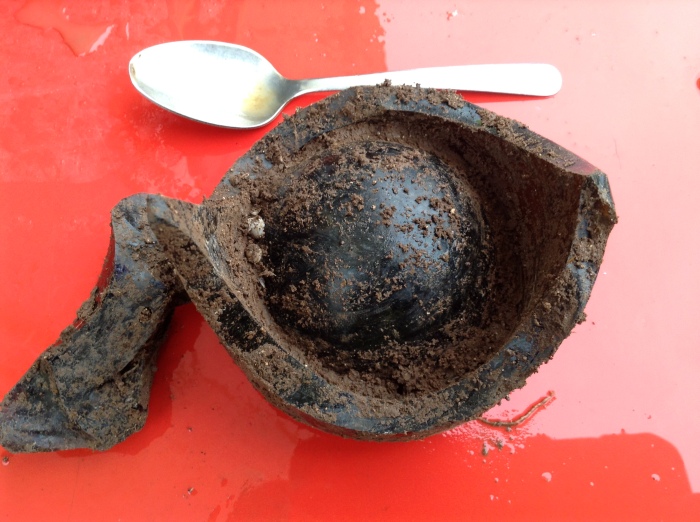 The bottle came from the area in the top corner of the photo below. The ranging rods used below are graduated in 500mm sections 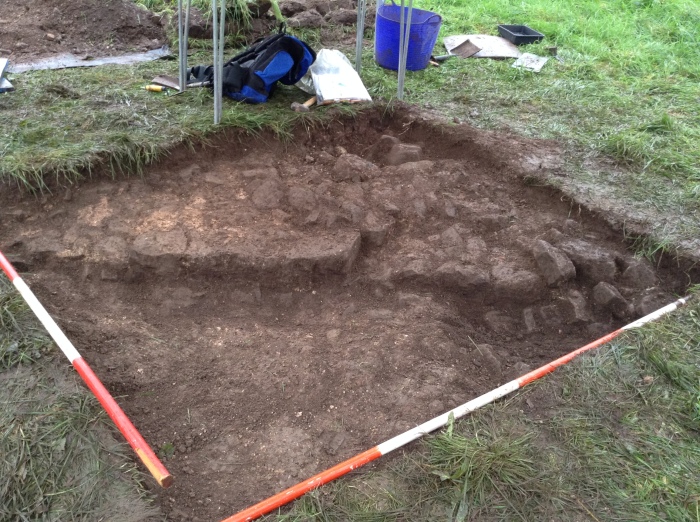 The view looking the other way ( below) 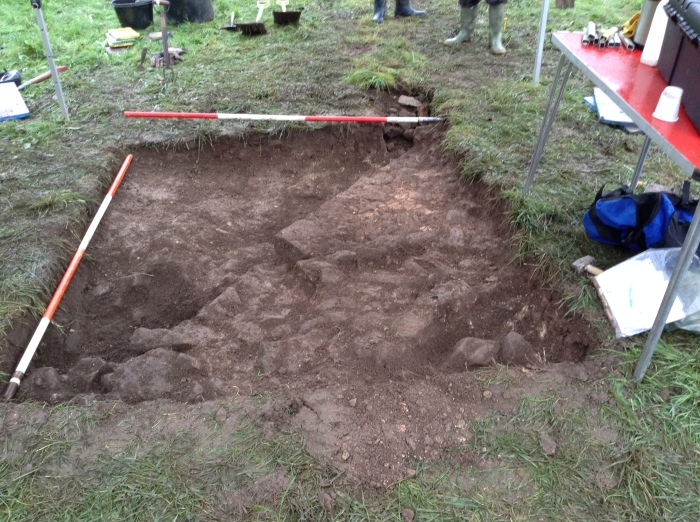 The area shown below may be part of an oven

Once the trench had been recorded, it was time to cover it over again. This is a very big field, with a small trench in it, so in order to be able to find the trench easily again, we marked each corner with a metal peg driven into the soil, and put a large metal bar on top of the  foundations so that Jim can find the spot next time with his metal detector. We will not be opening this trench until next year, and in that time the ground will have recovered and there will be not trace of us ever being there.

The trench was covered in polythene sheeting, then backfilled and re-turfed. 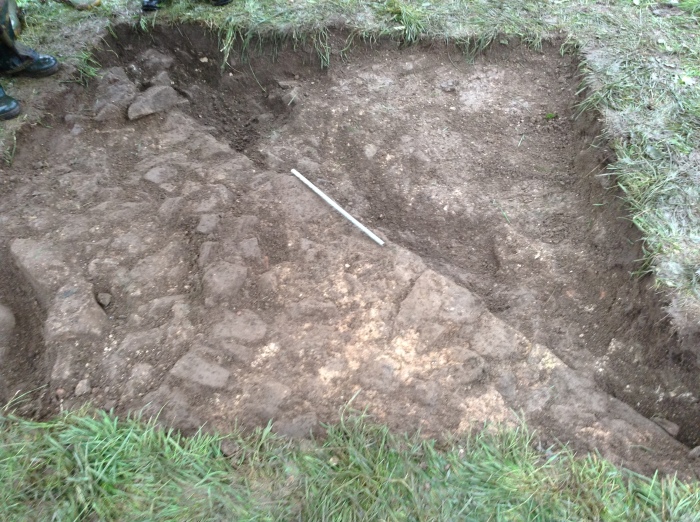 No sign that we were ever there ! Now the tricky operation of getting into a nice clean dry car without getting the interior covered in 3 tons of  Llanfrechfa’s finest mud. 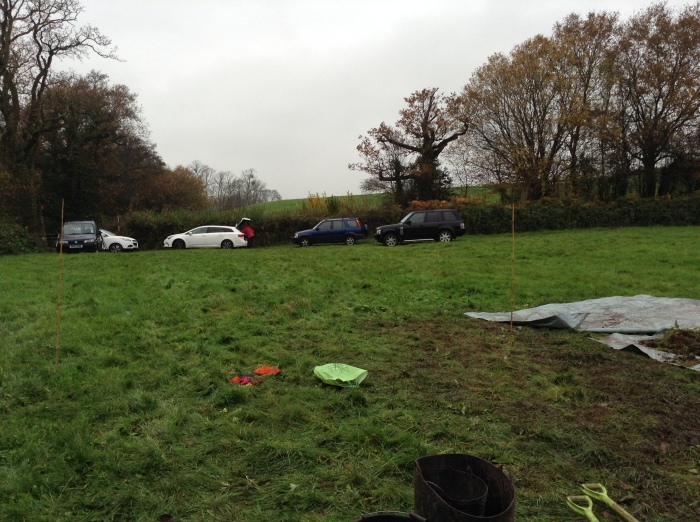 We are hoping to revisit this site over the coming months /years to expose more of this Farmstead with the kind permission of the land owner. We have found the building we came to look for, so we can consider the past 2 days to be a resounding success !

The willing band of Archaeologists ( from the viewers left to right )

Rodger – Proper Archaeologist ( with letters after his name and everything! )

Sorry about the photo quality below , the Ipad was extremely soggy by this stage

Not shown but also present

Please note that this blog has been written as a social media exercise and is not intended as a proper or factual record of the investigation.